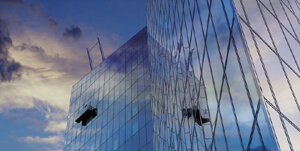 So you’re ready to take your business to the next level, checked the IT forecast and discovered that today and tomorrow are going to be … cloudy. Joking aside, cloud computing has really taken off in the business world, with a number of household-name companies using remote servers and networks to store data and access services. If you use a tablet, smartphone, web browser or online services like Dropbox or Gmail, you’re already connected to the cloud. If you’re not already on the cloud, it may pay to consider getting in on the act.

According to IT research firm Gartner, cloud computing has made it past the early development stage and is now in a strong phase of ‘productivity’. So who have been the first to sign up to these services?

Cloud computing is the sharing of IT resources where services such as apps, storage, data centres and servers are delivered to an organisation through the internet on a pay-for-use basis. The converged infrastructure and sharing of services in a single cloud can be relatively small, or large enough to provide global-wide resources – for instance, a cloud used by 2 countries with very different working hours such as France and Canada.

Sharing cloud services also eliminates the need to pay for hardware that slowly becomes outdated and needs replacing. With users paying for an infrastructure, everyone contributes to keeping the technology up to date and other mutually desirable aspects.

Business computing is becoming more virtualised and the resulting decrease in user involvement, combined with pooled resources, results in lower labour costs, fewer human errors and greater productivity. In other words, local servers and personal devices are no longer needed, as all are shared on the cloud by different users, and fewer employees are required. Businesses such as IBM have reportedly reduced 50,000 offshore staff in the past few years as the need for software development and business processes has dropped due to cloud computing and automation software.

A castle in the clouds: kings of the industry

Venture capitalists and IT start-ups have joined the cloud in increasing numbers. Internet security firm CloudLock, app software developers CloudMunch, and portable apps provider ElasticBox have all enjoyed millions of pounds in funding for their growing businesses.

Big businesses aren’t slow to harness cloud computing either. As usual, industry super-giants Microsoft, Amazon and Apple got in early and quickly turned this new form of computing into profit.

Don’t keep your feet on the ground – find a cloud

Few stragglers have opted out of (or not yet joined) cloud computing. Facebook prefers large data centres – but for how much longer? Cloud users who praise the flexibility, disaster recovery measures, automatic software updates and security of the cloud might point to the data security breaches and privacy issues that have recently plagued the social media network as persuasive reasons to leave behind hardware-heavy, twentieth-century vibe before Facebook makes itself obsolete – an interesting case all businesses should take into account.

Find out more on how your business can benefit from DCSL’s hosting services and cloud-based solutions or give us a call to discuss your hosting requirements.

DCSL is delighted to announce that it is now officially an accredited Microsoft Cloud Solution Provider. As a CSP, we now have a…

DCSL is proud to be part of the G-Cloud framework

DCSL Software is thrilled to announce that we have been renewed as a supplier on the UK Government’s G-Cloud framework. We have yet…

What is Cloud Computing?

And here’s a great infographic from Wikibon Blog showing what Cloud Computing is all about.