The Good Exchange is an online charity matching platform designed to transform charitable giving. Owned by Greenham Trust, it is unique in its sector for helping funders find appropriate causes – according to criteria including local geography, type of cause, and target beneficiary group. Since 2016, The Good Exchange has helped channel over £13 million of funding, comprising £9 million of charitable grants and £4 million in public donations. Over 1,800 UK-based charitable organisations, including community groups, are registered on its platform.

The Good Exchange started out as a vehicle to administer Greenham Trust’s own charitable grants, before the Trust identified the opportunity to expand its use and connect other funders with suitable causes. The original ‘Find me a Grant’ platform had relatively basic functionality, and ran on traditional servers hosted and managed by a third party.

Enthusiastic about the wider potential, and keen to increase the platform’s scalability and scope, The Good Exchange realised it had outgrown the relationship with its original software developer and support provider, and needed to find a new partner.

“We wanted to move the platform into the cloud, specifically onto Microsoft Azure,” explains Helen Carlile, Systems Lead & Technical Support Manager at The Good Exchange. “We had reached the end of the road with our existing partner, which did not have the expertise nor know the best way to move us forward. If we had stayed with them, we would never have been able to scale up our activities in the way we wanted to. Our priority was to find someone capable of supporting us in our requirements, and who was as enthusiastic as we are about the potential for further development.” 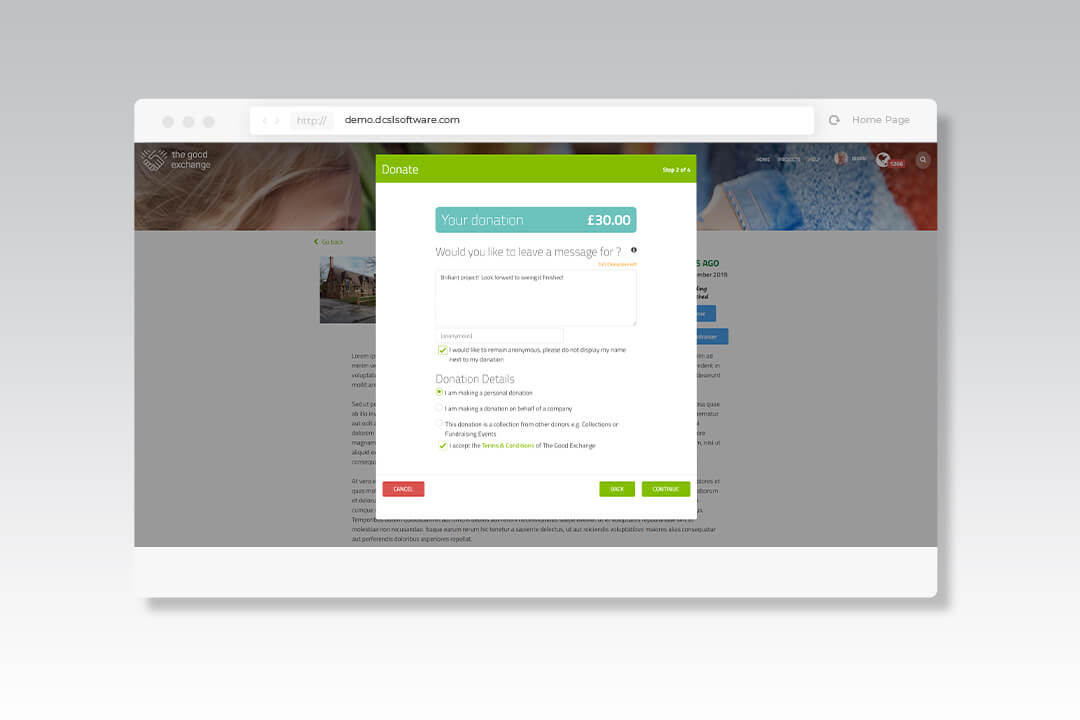 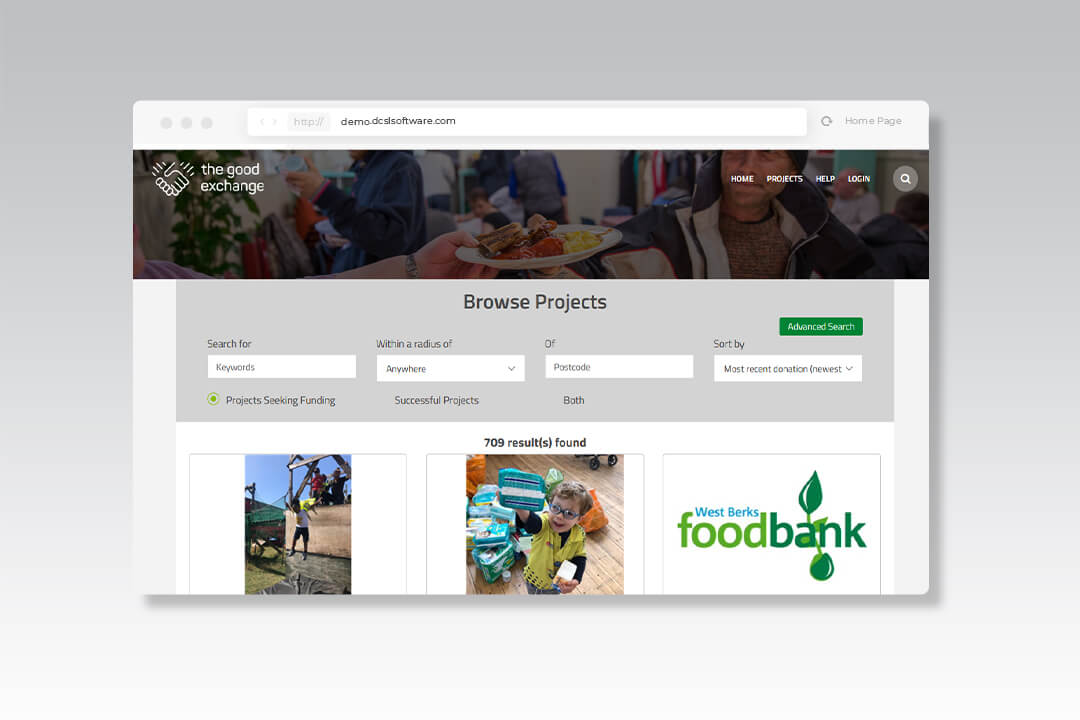 The Good Exchange invited three software development firms to pitch for the new work. DCSL Software was a strong contender from the outset. “When DCSL came to pitch, a number of factors stood out for us. They were very professional. They took on board what we wanted to do and, when we asked them to suggest how we could do certain things better, they had plenty of ideas. Then, when we visited their offices to understand their set-up, it was clear DCSL had the capability, the tools and the capacity – to migrate us to Azure and then to transform the donor journey and the user experience. They came out on top.”

They were very professional. They took on board what we wanted to do and, when we asked them to suggest how we could do certain things better, they had plenty of ideas. Then, when we visited their offices to understand their set-up, it was clear DCSL had the capability, the tools and the capacity - to migrate us to Azure and then to transform the donor journey and the user experience. They came out on top.

DCSL Software’s agile, iterative approach to development confirmed that the company was right for the project. “We were very keen to be as involved as possible and while the previous company we worked with used an agile methodology in theory, in practice we weren’t as involved as we would have liked to be. They were also a bit too far away really – probably two hours away – so it wasn’t that easy to get together,” Helen says. “DCSL are much closer which helps – we can just pop down, and vice versa.” Helen has daily Scrum calls with the developer and software architect at DCSL to keep everything on track, then a longer monthly review session to go over next requirements.

Migrating to the Azure cloud was a major undertaking, but DCSL were more than up to the task, Helen notes. “We had a number of databases we wanted to consolidate, tidying what was in the background,” she says. “It was a complex project, with the switch-over and testing, then informing everyone about the changes, but DCSL had a good plan and we worked together well to launch successfully. DCSL worked hard and put in all the hours to get this right and to deliver on time.”

DCSL used an Azure subscription owned by The Good Exchange which, as a not-for-profit organisation, gets an allowance from Microsoft. DCSL also provides The Good Exchange with a single point of contact for application and infrastructure support.

A further project involved accommodating a major change to how The Good Exchange charges fees to applicants. “We wanted to provide complete transparency to funders, to demonstrate to them that 100 per cent of all funds and donations go to the intended causes,” Helen explains. “Previously applicants paid a small percentage on all transactions; now we collect a fee by direct debit after the fact, to make clear that any charge we have to make is separate from donated funds. This required major changes to the way fees were applied through the system, and new associated reports for us and for our end users. It was a six-month project and very complex, but again DCSL took everything in its stride, handled it ably and delivered as needed.” 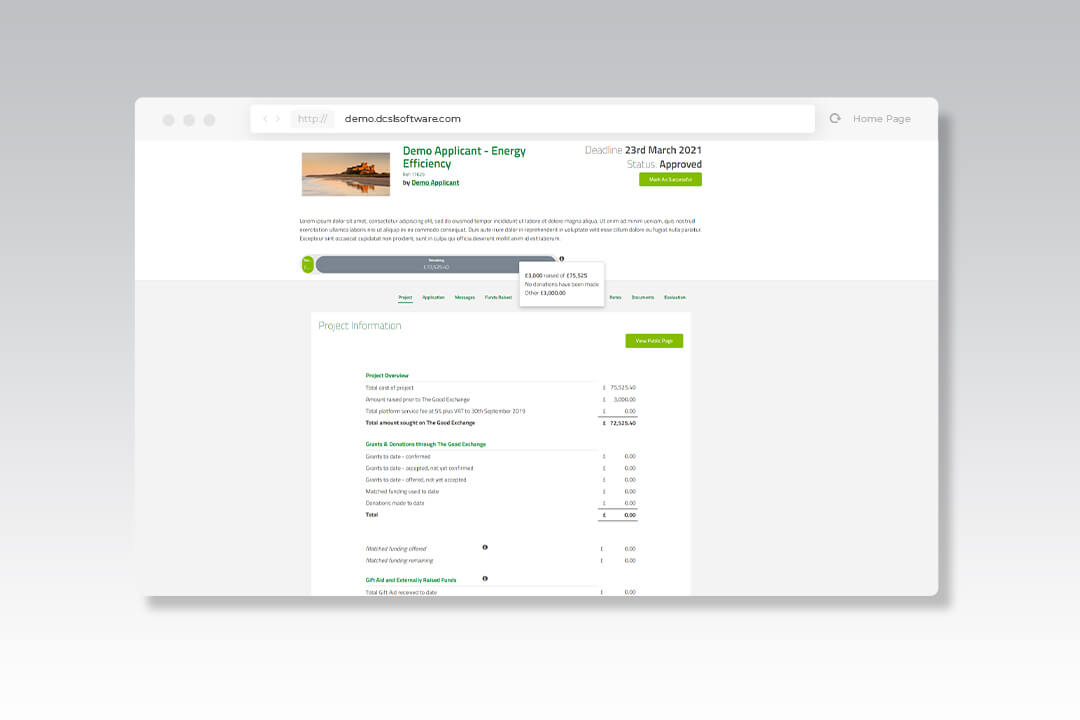 After such a positive experience, The Good Exchange is already looking ahead to next opportunities. These include working with DCSL Software to transform donor journeys via the matchmaking platform. “The aim is to make the experience more appealing and easier to navigate,” Helen explains. “The user experience DCSL inherited was bland, with a generic page and a lack of visibility of who the donor was giving to. We also want to enhance the functionality – for example making it easy for people to share causes and donations on social media.”

Further plans include integration with external systems to enable new, deeper partnerships across the charitable sector. “For example, Oxford Community Foundation has its own customer relationship management system which it uses for managing its application process,” Helen says. “We wanted to be able to link this with our applications, to remove any duplication. It’s something we’re working on with DCSL – creating a data export tool to enable partners to pick projects they want to support, and pull data across into their own systems.”

Of the ongoing working relationship with DCSL Software, Helen says she is very impressed and happy. “The team are so professional, helpful, friendly and approachable,” she says. “We never feel inhibited about asking for something, which is important when a project is so critical to what we do.”

The team are so professional, helpful, friendly and approachable. We never feel inhibited about asking for something, which is important when a project is so critical to what we do.

Thinking of moving to the cloud?

Augustus Martin is a leading UK marketing services business, specialising in creating, manufacturing and implementing retail activity for top consumer brands in the…