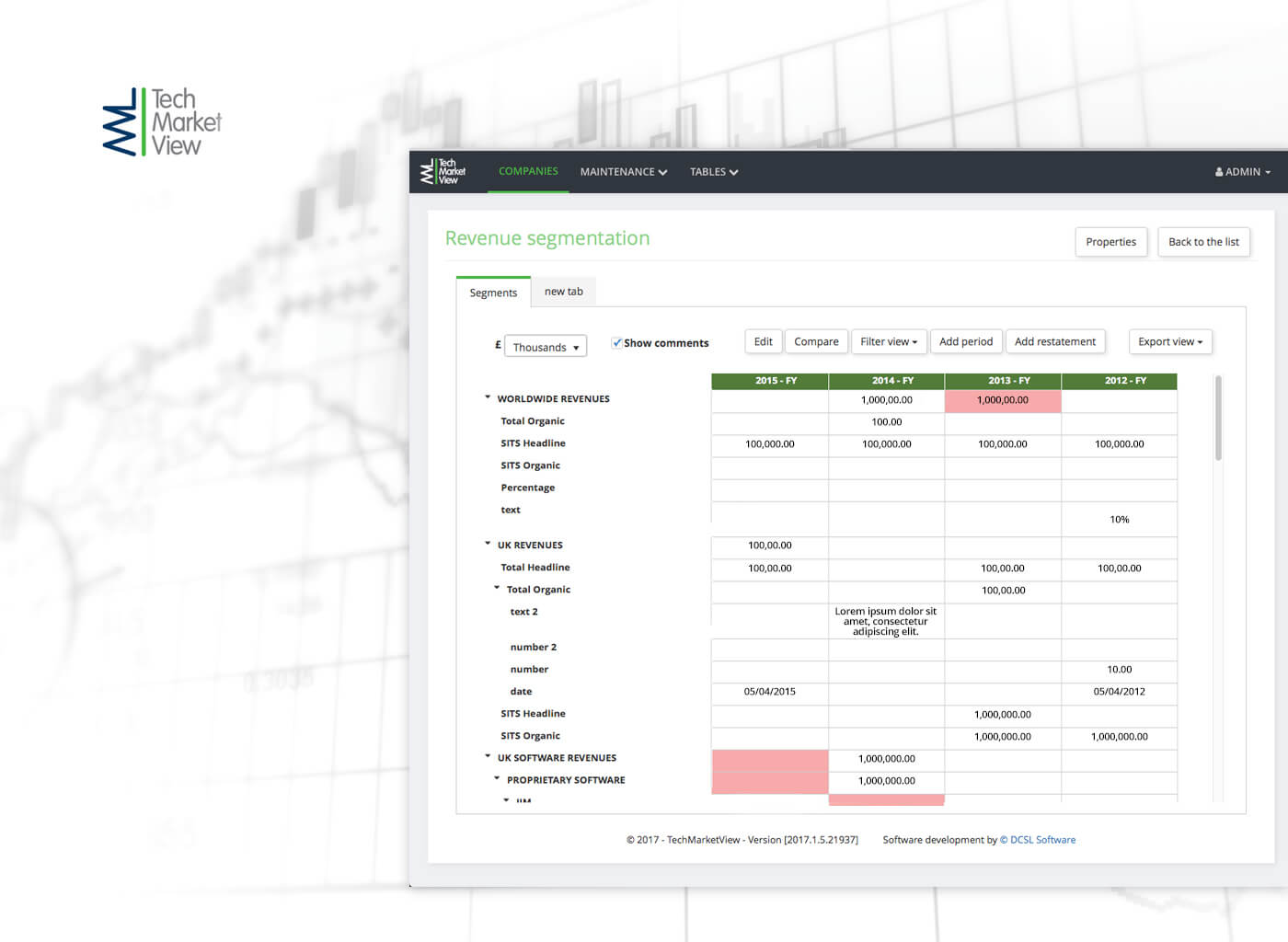 TechMarketView is a respected provider of research and analysis on the UK software and IT services market. Its insight is relied upon by technology suppliers to keep abreast of competitors and emerging market trends. In addition to an extensive portfolio of timely, focused subscription research services, TechMarketView publishes UKHotViews, a daily source of informed opinion and comment on the latest technology market developments and issues. Founded in 2009 by leading analysts Richard Holway and Anthony Miller, TechMarketView has grown quickly and boasts an elite team of home-based analysts located across the Home Counties.

Fundamental to TechMarketView’s research is its database of UK tech companies, containing financial data about each supplier. This data is updated continually by TechMarketView analysts, remotely from their homes and via mobile devices as the company does not have a central office.

Over time, TechMarketView had outgrown its original database system. This had been built several years ago to a specification that suited the business at the time, but did not offer the scalability and flexibility now needed to support TechMarketView’s ambitions. Traditionally, the business has focused its attentions on some 200 software and IT services suppliers; the plan now is to expand that coverage to several thousand, and increase the scope of information collected on each.

To make any changes to the old database structure and user interface, TechMarketView had to go back to the software developer. The system didn’t have any inherent reporting capabilities either, so to conduct analysis the team had to export the entire database to Excel. As the company’s vision for new products and services grew, this limitation increasingly presented a barrier to progress.

TechMarketView decided to take a fresh look at the market in its search for a suitable development partner, and was introduced to DCSL Software. “One of the real attractions for us was that DCSL is based in Farnborough, which is within reasonable travelling distance of most of our team,” says Anthony Miller, TechMarketView’s co-founder and managing partner.

They are very personable and inspired confidence immediately. They also had a good team, large enough that we wouldn’t be exposed if someone suddenly moved on.

From the first meeting it was clear DCSL was a good fit. “They are very personable and inspired confidence immediately,” Mr Miller says. “They also had a good team, large enough that we wouldn’t be exposed if someone suddenly moved on.”

What really impressed us was their design methodology.

“But what really impressed us was their design methodology,” he notes. “DCSL have a sophisticated prototyping tool and were able to mock up the database in front of our eyes as we told them what we wanted. After just three days in a room with them, and before a line of code had been written, we were already 90 per cent of the way there with the final design.”

It meant we could change our minds and tweak the design on the fly, which considerably simplified and shortened the design process.

This was important for a number of reasons, Mr Miller explains. “It meant we could change our minds and tweak the design on the fly, which considerably simplified and shortened the design process.” TechMarketView needed to have the new database ready by the end of March to prepare work for its next annual report. “This was a tight deadline,” Mr Miller says, “but DCSL finished on schedule.”

With a team of two full-time developers, a tester/liaison and an overseeing architect, DCSL built the new database system using the latest Microsoft ASP.NET technologies. It created two online portals – one which analysts could use to test data, and the other to work with real data. TechMarketView was involved throughout the process, in face-to-face meetings and also via email, phone and Skype.

The new system, into which DCSL has migrated all of TechMarketView’s existing company data, has integral analysis and reporting. It highly scalable and, crucially, can be changed by authorised analysts. Although the system is inherently very intuitive, DCSL provided training to the analysts.

The new database system includes extensive data validation checks, so there is less risk of entering incorrect data. The built-in analysis makes it much easier and quicker to make comparisons between companies. This now takes a few minutes rather than several hours.

They are extremely responsive to our requirements. This is tremendously valuable.

Although the new system has only just gone live, Mr Miller reports that it has been enthusiastically embraced by the analyst team. And if users have additional needs or preferences, DCSL is just a phone call away. “They are extremely responsive to our requirements,” he says. “This is tremendously valuable.”

Once the company has completed its current annual market report, due to be published in June, it will start to use the new database system as the basis for new product and service innovation. “This system is fundamental to our business for the new services we want to develop,” Mr Miller concludes. “It’s very cost effective for us because we can do a lot of our own modifications ourselves. I am very pleased that we made the decision to go with DCSL.”

Apomatix is a start-up software as a service (SaaS) provider, specialising in online cybersecurity assessment solutions. Having invested in a number of cyber security companies over the years, Apomatix’s founders had identified a gap in the market for an efficient and cost-effective cyber security assessment service to address their clients’ risks and provisions holistically – i.e. from their internal IT set-up and perspective, to non-technical as well as supply chain related risks.

Educational Competencies Consortium (ECC) Ltd draws its members from 125 universities and colleges across the UK, who own and operate the company. It works with 75 per cent of the UK’s universities, in all major sector mission groups and is partners with a number of chartered institutions, education councils and associations, trade unions and recruitment agencies.