The Scottish Huntington’s Association (SHA) is an independent charity serving 5,000 families across Scotland whose lives are affected by the incurable condition. To satisfy the needs of those funding its work, the SHA has an obligation to report on how and where its services are being used, and the impact they have – information that is also valuable in the charity’s own planning. Yet the SHA did not have a central system to consolidate data from its 12 different locations, nor clear visibility of its multiple services to ensure that families’ needs were consistently met.

Winning the tender for a new, bespoke software system against competition from three other shortlisted companies, DCSL Software translated the SHA’s needs into a technical specification, producing a working prototype within just a few weeks. The system, known as GEORGE, records information about where and how families use the charity’s services, and the impact they have. Accurate reports can be turned around in minutes, staff are better informed, and there are much greater efficiencies in the use of resources. The most important result of all is a superior service for clients.

The Scottish Huntington’s Association, headquartered in Paisley, is currently marking its 21st year of supporting Scottish families whose lives are touched by Huntington’s Disease – a still little understood disorder which has no known cure. While part of the UK and Ireland Huntington’s Alliance, the organisation is an independent charity, run by 33 staff and turning over £1 million a year. Its services, delivered from 12 locations, currently help 5,000 individuals across Scotland.

The SHA’s services fall into two broad categories – the provision of Huntington’s specialist nurses, helping adult patients and their families to manage their symptoms and gain access to the right care; and a national youth service, supporting those in a caregiving role as well as those who will be tested for the condition when they reach 18.

Keen to address the situation without diverting much needed funds away from its core activities, the SHA put out a tender for a data management system that would automate and enhance its information recording and reporting capabilities. The charity needed something fit for purpose, adaptable so that its use could be expanded in future as needed, and affordable. 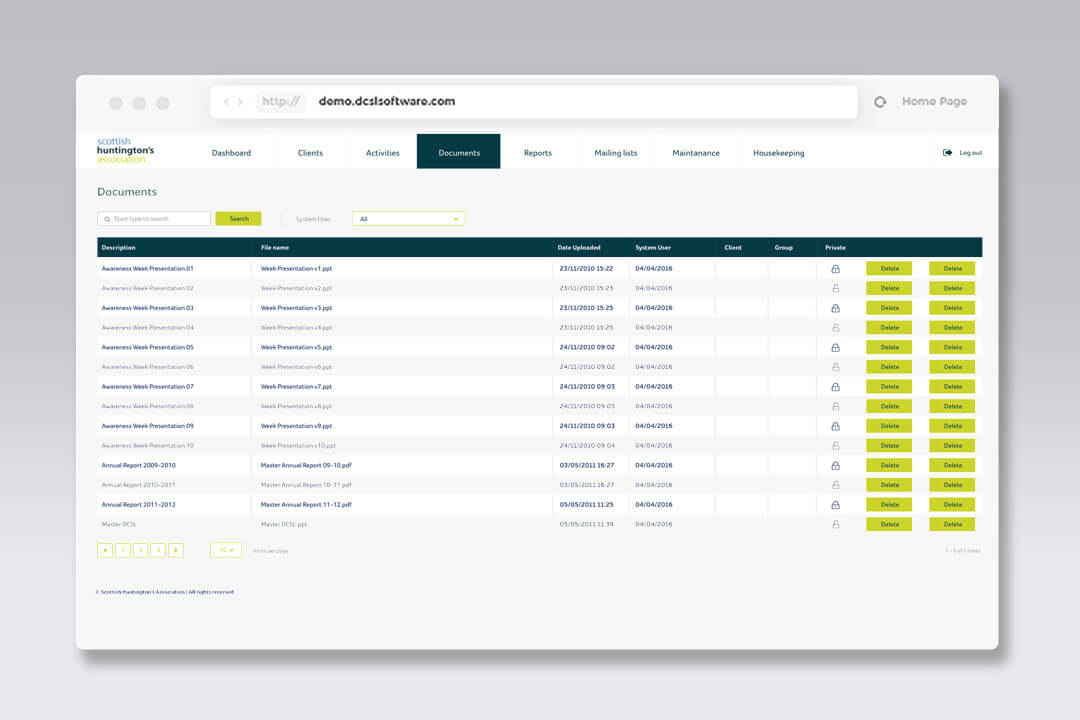 It short-listed four potential suppliers – two from Scotland, and two from further afield – which it then evaluated in more detail. DCSL Bespoke Software stood out because its proposition was the most affordable, and because the company has a proven track record of providing customised database solutions for other similar healthcare organisations and charities. It also boded well that DCSL Software’s principal staff were prepared to fly up to Scotland to talk through the charity’s exact requirements the day after initial contact.

Says John, “I was very impressed when I met Nick and Dan, who were clearly two very bright and articulate individuals, who had a good grasp of what we needed.”

The SHA is funded by around 35 backers, from local authorities and NHS health boards, to the Big Lottery & commercial organisations such as Lloyds TSB. To satisfy the needs of these important investors, the charity must analyse and report on how and where its services are being used, and the impact they have. As well as helping to ensure an ongoing source of funding, the organisation also needs this information for its own purposes, so that it can hone its planning and maximise resources.

Until recently, compiling reports had been labour intensive. The charity did not have a central system allowing it to collect and consolidate data from its 12 different locations and discrete services, so relied on manual intervention to blend all of the input into a single spreadsheet. “The process was time consuming, error-prone and by the time the reports were collated, the data was already out of date,” recalls SHA Chief Executive John Eden. “To prepare information for our funders, we’d have to give all of the services at least four weeks’ notice, and still allow for some chasing.”

At the same time, the charity did not have clear visibility of what was happening across its various locations, making it difficult to ensure that services were consistent and complete.

A data management system that captures, collates and consolidates data from 12 different locations and discrete services, and incorporates the facility to map family networks within the database.

It’s quite a challenge to translate a client’s aspirations and needs into a system that works, but they did that phenomenally well. DCSL’s personnel are fantastic to deal with – very helpful, professional and responsive. They have absolutely delivered – we have ended up exactly where we wanted to be. With other software companies, that’s often not the case.

Because speed was of the essence, DCSL Software delivered a working prototype for the SHA to test within just 4-6 weeks.

The solution incorporated the facility to map family networks within the database. John Eden commented “This was a new innovation that DCSL had introduced, which is proving very valuable to us. Because Huntington’s is a genetic disease, we could be working with three generations of the same family, so it’s extremely useful to be able to map and monitor these connections.”

As well as capturing and collating information about how families experience the SHA’s services, the system contains a number of pre-defined reports. “We have achieved our aim of gaining real-time visibility of the population we’re serving,” John continued. “We can track how many men or women are affected, which ethnic groups they’re from, and so on, complete with a diagram showing how clients have rated the help we have provided. It’s very easy now to get a quick status overview, whether for the service overall or for individual components.”

Instead of requiring a month’s notice and six days of compilation, it now takes the SHA just a few minutes to generate its reports, producing ‘massive’ efficiency savings across 12 services, John notes.

“There have undoubtedly been efficiency savings,” he says. “The software helps support our funding applications, too.” We have just completed an application for the Big Lottery, an organisation which is very keen on monitoring results.

“GEORGE is also incredibly important from a strategic point of view. Now we know exactly who we serve, where, and what their needs are; and, at an individual level, nurses can track the outcomes of the work they do. When you’re working hard, it becomes difficult to see the wood for the trees – for example, to spot if someone is not getting access to physiotherapy. Now we can see that at a glance and do something about it.”

Although still a young system, the transformation has been substantial. “In all likelihood we will continue to build on the new system,” John says. “It has already given staff an appetite for a paperless clinical management system, so that may be the next development.”

“I’m extremely happy with the work DCSL Software has done for us,” he concludes. “It’s quite a challenge to translate a client’s aspirations and needs into a system that works, but they did that phenomenally well. DCSL’s personnel are fantastic to deal with – very helpful, professional and responsive. Distance wasn’t an issue, either. They have absolutely delivered – we have ended up exactly where we wanted to be. With other software companies, that’s often not the case.”

Executive Summary Following Brighton and Hove Integrated Care Service’s (BICS) first year in operation, the not-for-profit organisation had a comprehensive understanding of its…