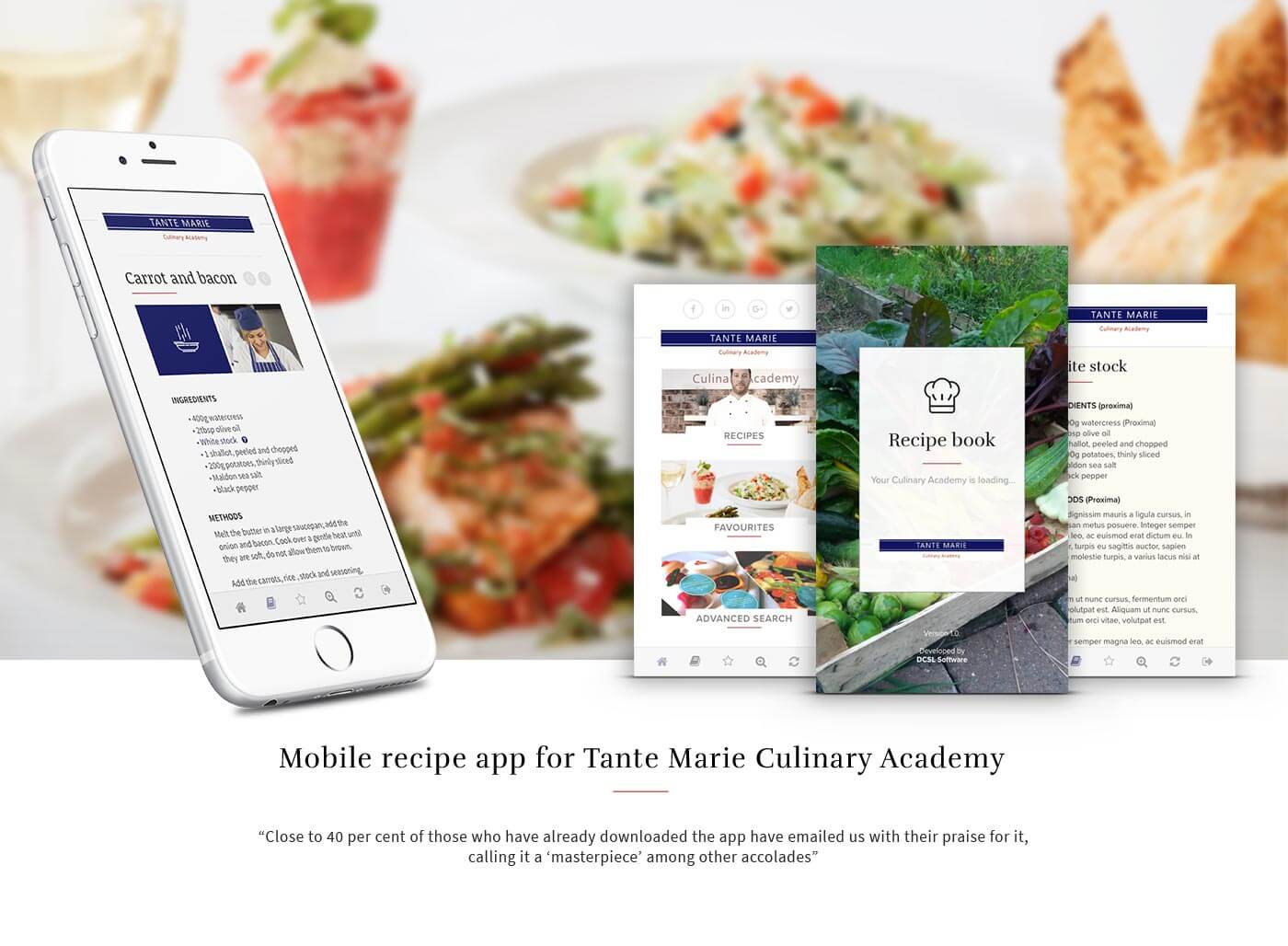 As the UK’s longest established independent cookery school, Tante Marie Culinary Academy has developed an internationally-acclaimed reputation for excellence. Its Diploma students are running successful food businesses around the world.

In 2015, the Academy moved to new premises and took the opportunity to streamline many of its internal operational procedures, using technology to coordinate its multiple teaching kitchens, demonstration and lecture theatre, manage the recipe programmes and create order lists. It achieved this with a bespoke database-driven operations management system designed, developed and hosted by DCSL Software. As well as making planning more efficient, the new system was intended as a springboard for future digital innovation.

To maintain its competitive lead, Tante Marie is always looking for new ways to add value for its students, both while they are at the Academy, and as they take their new-found skills out into the world.

Traditionally, Diploma graduates have taken away their hefty 650-page recipe files, which they have continued to use as the basis for menus long after they have earned their qualifications. But as chefs have spread their wings and headed to the four corners of the globe, from top restaurants in New York to exclusive yachts sailing the Mediterranean and ski resorts high in the mountains, the bulky lever-arch folders have become cumbersome.

To get round this issue, and to keep pace with an increasingly digital world, Tante Marie wanted to offer its graduates the option of continuous mobile access to the same recipe back-catalogue, along with updates, without the need to keep carrying their physical folders around.

To confirm this was something that graduates would be interested in and willing to pay for, Tante Marie Culinary Academy sent out a survey to 1,000 former students. Within three days, 300 people had replied with a resounding “Yes,” saying that they thought the proposition was “fantastic.”

“We had two main stipulations,” explains Andrew Maxwell, the Academy’s managing director. “First, we wanted students to be able to access the content from anywhere, whether on- or offline. Second, we needed to retain control of our copyrighted proprietary recipes by ensuring these couldn’t be circulated more generally on the internet.”

Contacting DCSL Software was the natural next step, based on the huge success of the earlier operations system project in 2015. The mobile app would build on this investment.

DCSL developed the app to run on both iOS and Android mobile platforms. DCSL wrote the application using the cross-platform mobile API, Xamarin.Forms, which is ideal for creating native apps for iOS and Android rapidly and efficiently. DCSL designed the product so that students can download and access recipes without an internet connection.

Students and graduates are invited to subscribe to the mobile app via the App Store or Google Play, for an annual fee of £25. 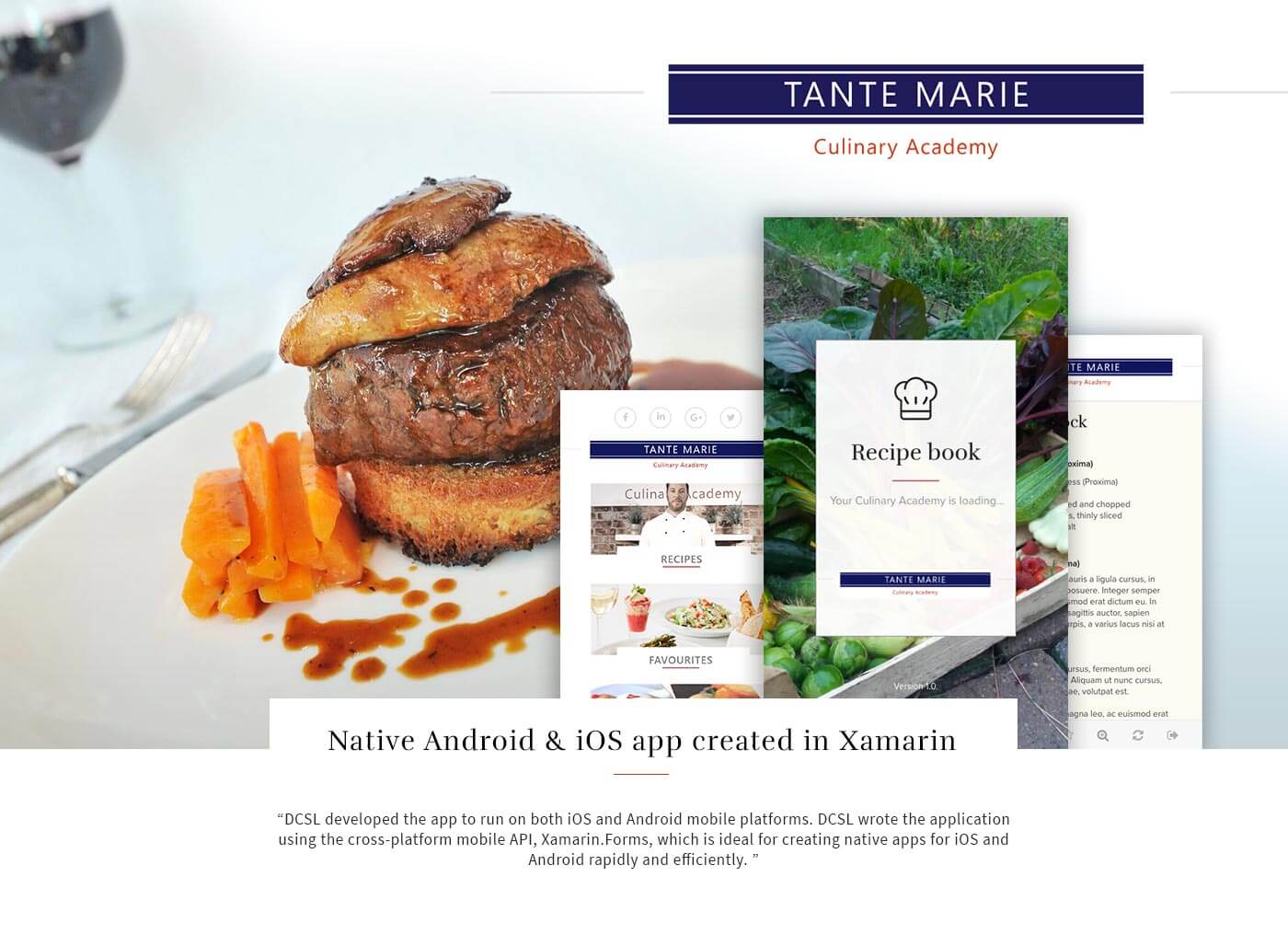 The app went live in December 2017, to the delight of Tante Marie Culinary Academy students and graduates which have been steadily subscribing and downloading their recipe folders. Mr Maxwell says he has been astounded by the tide of enthusiastic feedback that has come flooding in, without any prompting.

Close to 40 per cent of those who have already downloaded the app have emailed us with their praise for it, calling it a ‘masterpiece’ among other accolades,

“Close to 40 per cent of those who have already downloaded the app have emailed us with their praise for it, calling it a ‘masterpiece’ among other accolades,” he says. “I knew the guys at DCSL Software would build a good app, but the scale of the feedback has blown me away. People love it!” 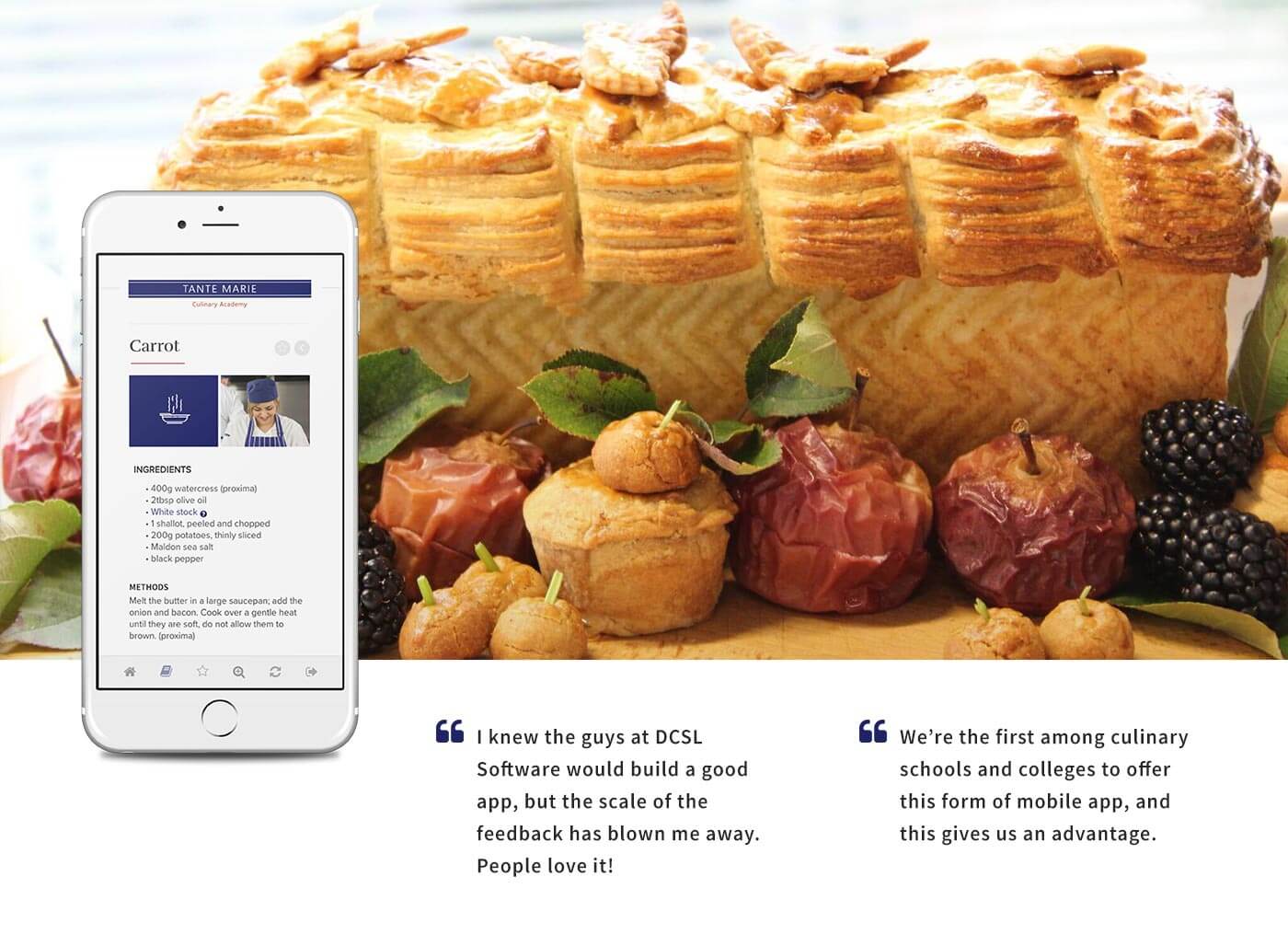 For the Academy, having the app provides an edge over rival chef schools which charge huge fees for a full set of cookery books at the start of their courses, on top of their high course costs. “We’re the first among culinary schools and colleges to offer this form of mobile app, and this gives us an advantage,” Mr Maxwell says. “These days, unless your aim is to produce a beautiful coffee table cookbook, you’re better off investing in the digital alternative. This is about moving with the times. It will also open doors, as we take the business more global, as the app has no geographic borders. It will keep us connected to our graduates, and provide a foundation for growth.”

Although the app’s subscription fee is expected to bring in modest revenues initially, Tante Marie Culinary Academy envisages a range of spin-off opportunities from its digitisation efforts. It is already talking to DCSL Software about the possibility of white-labelling and reselling its ‘cookery school management system’ under the Tante Marie brand, for instance.

The Academy also plans to work with DCSL on next phases of enhancements to the mobile app, for example introducing the ability for students to add their own notes to the recipes digitally, removing the need for physical binders during classes. “Each 650-page folder costs £35 to print, an expense we could potentially phase out in due course,” Mr Maxwell says. “We also like the idea of encouraging students to take and upload pictures of their dishes, which is something else we will work towards.”

The Academy is looking into the possibility of creating international versions of its recipes, too. DCSL’s chosen development platform supports language translation: all that needs to be worked out is how to convert specific terminology and forms of measurement to fit with other markets.

DCSL never ceases to amaze us with what they can do, and the feedback from our students and graduates speaks for itself: we’re providing something they have hungered for, and they love it.

However the business moves forward, DCSL Software remains central to the Tante Marie Culinary Academy’s plans. “DCSL never ceases to amaze us with what they can do, and the feedback from our students and graduates speaks for itself: we’re providing something they have hungered for, and they love it.”

Tante Marie is the UK’s oldest independent culinary academy, offering cookery lessons ranging from one-day workshops to a year-long full-time Cordon Bleu Level 4 Diploma. Established in 1954 and now based in Woking, Surrey, it celebrated its 60th anniversary in 2014.