When he retired from academia, James White set up his own company, LDAT Online Ltd, to promote his sophisticated Landfill Degradation and Transport model (LDAT) to universities and the global waste management industry. The software-based model, which James has developed and refined over the last 20 years, simulates the degradation of landfill waste into undesirable gases and contaminated water (leachate). It offers a powerful tool for environmental science researchers and waste management organisations, such as landfill operators, striving to be cleaner and greener.

James’s background is in civil engineering, with particular expertise in fluid dynamics, hydraulics, ground water flow and waste management. When he first developed the LDAT model, it was in spreadsheet form, until James taught himself how to write a desktop application – something he could send out on a disk for other academics and interested parties in the industry so they could run their own simulations on their local servers.

The software wasn’t very intuitive though, and James had to include instructions on how to use it. “It was all a bit cumbersome,” he recalls. Reliance on customers’ local IT systems incurred performance limitations too. Advanced modelling requires substantial processing power and data storage capacity. So more recently James had created his own web site, linking potential users to cloud-based computing power and storage.

But while 40 different organisations had used LDAT in the past, take-up of the web facility was poor and, from discussions with colleagues, James realised it was the overly complex user experience that was putting people off. They appreciated what the software offered them, but couldn’t get quickly enough to the answers they wanted.

“Although it worked okay, the online package was very clunky, slow and the technology I was using wasn’t exactly the latest and best,” James admits. “I knew there had to be a better way.” 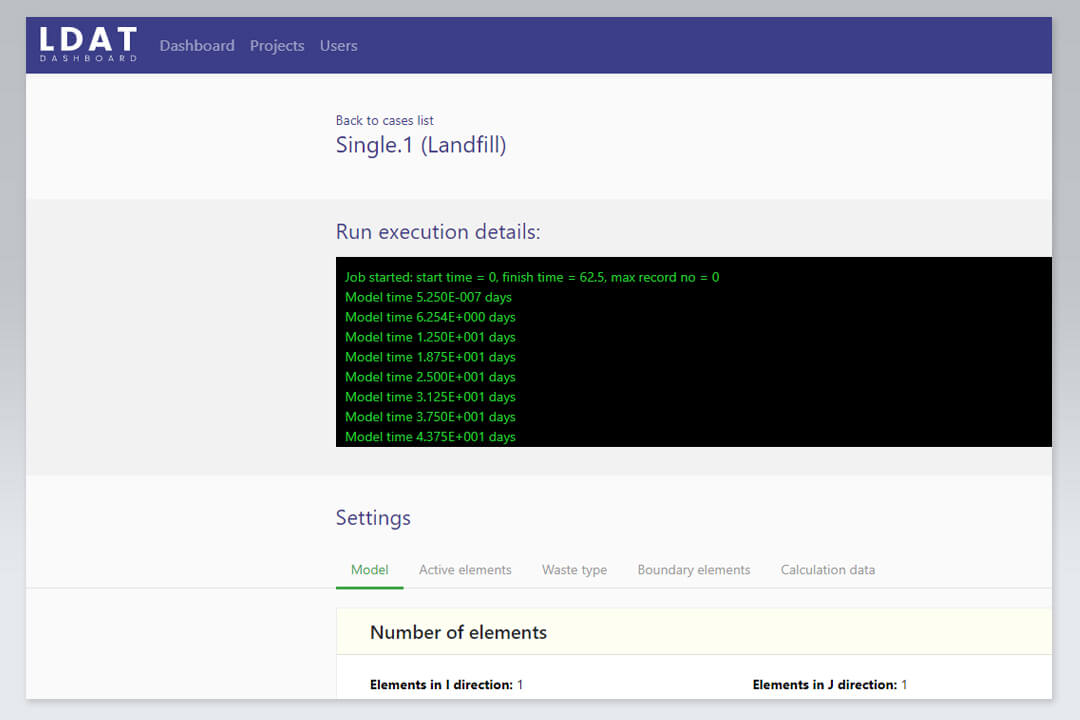 When James surveyed the market for a potential development partner, he knew he wanted someone at the top of their game, conveniently located, and willing to take on a challenge. DCSL Software came up straight away in his searches for leading software companies, and James was relieved and grateful when MD Nick Thompson and technical director Alexis Shirtliff took up the gauntlet. “I wanted them to review my code and suggest improvements to the user experience, and to the system’s scale, performance and security,” James says.

“DCSL have delivered exactly what I wanted. The functionality of the site is very strong.”

To improve efficiency, one of DCSL’s technical architects explored the potential to use parallel processing, which made the LDAT algorithm run much faster. He also implemented batch processing so that a user would be able to run multiple model cases at the same time on a Microsoft Azure-based cloud platform.

The team then developed and tested a new, intuitive, modern front-end system, built using the latest Microsoft technologies and interface design. New functionality would allow students/lecturers and other potential interested parties to easily sign up for subscriptions and use the system for their own modelling needs. Other end user features included an enhanced visual dashboard to display findings in a way that people could easily understand.

James says he was ‘blown away’ with how readily DCSL Software got to grips with and has transformed a highly complex proposition. He particularly likes the way the company has applied Vue.js, the open-source JavaScript framework for building user interfaces and single-page applications. “This means that each time a user makes a small change to part of a page, the system doesn’t have to send everything back to the cloud for processing,” he explains. “Instead of having to wait, it’s instantaneous.”

“DCSL have delivered exactly what I wanted,” he says. “The functionality of the site is very strong. They have gone through my design and given it a much sharper architecture, a much more responsive editor and cleaner dashboard. DCSL have done a lot of security work, too, which I could never have matched and is a huge improvement on my home-made login system; they have used top-of-the-range Microsoft security. It’s very robust as well. The system doesn’t fall over; there’s no more user frustration.”

James hopes that the transformed web offering will position LDAT in front of a broader global market, because the model is now so much more accessible and easy to interact with. To his knowledge, LDAT remains the only facility of its kind, addressing a colossal global need. “No one else has done what I do,” he notes.

“I think they’re fantastic, I really do. They’ve been open-minded enough to take on this very unusual and complex project, and the speed with which they got up to grips with my requirements and have turned this job around, when they are so busy as a company, has been incredibly impressive...  I’m delighted with the outcome, and look forward to continuing our association.”

“Waste is very big business,” he continues. “Historically we’ve had interest from China, India and Australia as well as the UK, so there is a huge potential market out there. Between biochemistry, waste management and environmental science this is a huge field, with high volumes of students all looking for research projects. Even if LDAT is only used in an academic setting, the potential is phenomenal.”

Of his experience of working with DCSL Software, James says, “I think they’re fantastic, I really do. They’ve been open-minded enough to take on this very unusual and complex project, and the speed with which they got up to grips with my requirements and have turned this job around, when they are so busy as a company, has been incredibly impressive. We’ve had some great meetings at their offices in Farnborough kicking ideas around, and the cost and timescales were exactly as DCSL estimated. I’m delighted with the outcome, and look forward to continuing our association.”

Toolboxit is a new London-based start-up with big ambitions. During substantial and successful careers in the construction industry, founders Yvonne Edwards and Steven…