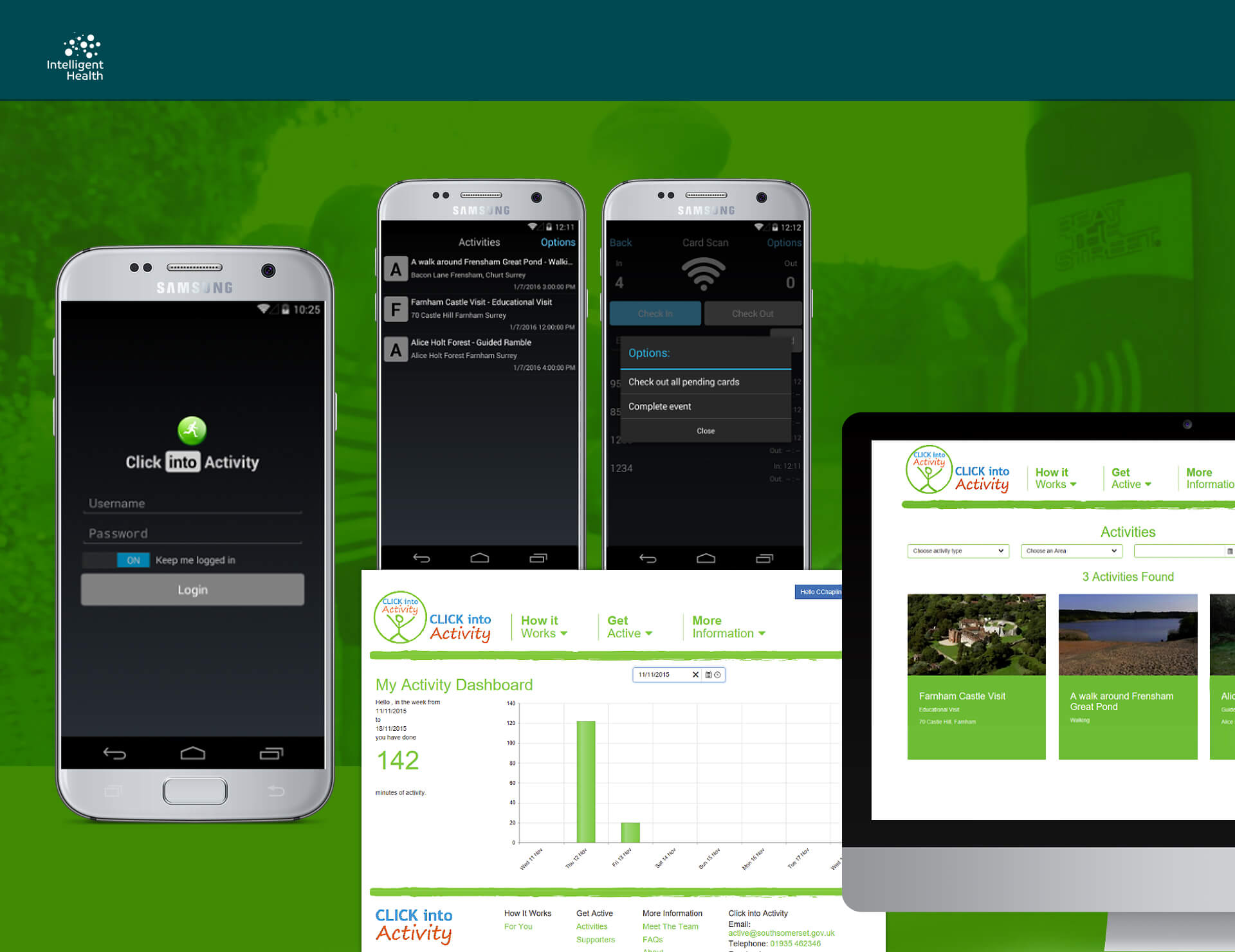 As a small but ambitious provider of health and wellness programs throughout the UK, Europe and other parts of the world, Intelligent Health’s mission is to build active communities and help people to engage with the great outdoors.

This focus on physical activity includes walking, cycling and other activities that get ten to forty thousand participants to play their part in a game that combines an online platform, radio-frequency identification (RFID) cards and outside exercise over a period of eight weeks.

Although the activities had been running for several years, Intelligent Health noted that certain areas, such as data collection and general usability, were in need of improvement overhaul.

In order for up to forty thousand players with RFID cards to successfully find and make contact with RFID readers placed around a specific town, the programs must run seamlessly and allow players to check distances walked, points accrued and where they stand in the overall competition. In short, the database was no longer living up to its potential or growing with the expansion of the game, which was connected to 25 fitness programs and eighty thousand people in 2015. From basic functioning to ease of use, the program was falling short of the company’s requirements and threatening the future of the game.

We were aware of DCSL, and had some good references for them, so we approached them to create a brand new system with fewer defects, in a very short time. I wanted a company that I could treat as a partner, rather than getting a product off of them. They proved to be just that. I chose them as someone that could work with me in developing and enhancing the product further.

In looking to strengthen their medical services, Intelligent Health realised that their RFID solution needed some functional improvements – DCSL Software was only too happy to take on the challenge.

Radio Frequency Identification (RFID) is one of the main ways for physical objects to interface with the Internet of Things (IoT). RFID allows data to be wirelessly transmitted from a physical object into a computer system.

Click into Activity is a system consisting of a ASP.Net MVC Website where users can register for activities and a companion Android mobile phone app allowing them to track their activities using NFC (Near Field Communication).

Each user has a card that has an embedded passive RFID chip so when the card is within 10 cm of the phone, the phone automatically communicates with the card and registers the card holder to the current event.

Using fluctuating numbers of developers as each stage of the project required, DCSL configured the new database to a cloud platform and created an entirely bespoke system in what Intelligent Health viewed as a very short time before the end of a particularly demanding deadline. DCSL developed and adapted as they progressed, working seven days a week to eradicate defects and radically modify the original system to suit new challenges. A tester and architect were also brought in to ensure the ongoing quality of the program at each critical stage and provide updates to Intelligent Health.

Working hand-in-hand, Intelligent Health and DCSL created an outline and abbreviated schedule, and reviewed key updates along the way – but there wasn’t time to draw up detailed plans for the project. As the complexity increased and the time allowance decreased, more developers were added to keep momentum moving swiftly and surely forward. Delays were minimised by careful prioritising and keeping a watchful eye on the ultimate goal so that nothing could side-track the project, no matter how unexpected the disruption. One of Intelligent Health’s team worked locally in the DCSL office, further strengthening the partnership between the two companies and keeping current runnings of the game going while the work was being carried out.

Despite the speed with which it was produced, the resulting program had no critical application faults, according to end-users. ‘In the previous version of the app, we were inundated with system errors of various kinds. When the new version developed by DCSL came out, there wasn’t one mention of problems with the system from any end-users. It’s been very reliable in its performance,’ stated Ian Mitchell. ‘We’re very impressed with the level of craftsmanship executed by DCSL.’

Intelligent Health are keen to keep DCSL on board for any future developments but it acknowledges the desirability of slowing the next round of innovation down to a more considered pace, given the brief deadline for this project. ‘We did much of the work at high speed, and they delivered on time. Ultimately, we pushed ourselves into a very tight timeline; it was really aggressive. A proper work schedule, that would give them time to do the work around the seams, and not rush forward, would be an improvement for us as a partnership, rather than setting impossible tasks. Future projects with them will have more flexible timelines,’ admits Mitchell. In fact, the company are already pursuing new ideas in partnership with DCSL, and would happily recommend DCSL to anyone considering their own tech improvements.

Their talent pool is fantastic. Like I said, the solution they developed works almost flawlessly and our users are more than satisfied.

activeNewham is a Leisure Trust running and supporting council leisure, sports and volunteering opportunities in the London Borough of Newham. For information consistency…

Mytime Active started managing leisure services for Bromley Council in 2004. Since then, through a combination of business acumen, best practice and community ethos, they have enjoyed rapid growth.