DACS (the Design & Artists Copyright Society) is the UK’s leading rights management organisation for visual artists, established over 35 years ago as a not-for-profit organisation run by artists for artists. It acts as a trusted broker for 100,000 individuals worldwide, collecting and distributing royalties due to them and their estates through schemes including Payback, Artist’s Resale Right, Copyright Licensing and Artimage. Over the last three and a half decades, DACS has collected and paid out over £100 million in royalties, supporting artists’ livelihoods, practice and legacy.

Each year in January, DACS runs a ‘Payback’ campaign encouraging artists to submit financial claims for use of their copyrighted images in books, TV programmes, in magazines and on web sites. Once these claims have been vetted and scored using a points system linked to the scale of usage of individuals’ work, DACS distributes a share of money between those claimants, allocated by the Copyright Licensing Agency (CLA). It is DACS’ mission to make sure that as many people as possible claim the money due to them, which means making the process intuitive, easy and quick.

Historically, artists would submit their claims using an outdated web interface. DACS would make the calculations and check everything against its old customised Microsoft Dynamics CRM system, used for distribution and invoicing. This time-consuming process was very resource-intensive: there could be tens of thousands of claims.

A decision to update DACS’ core business system prompted a review of the Payback process. “The question was whether we would be able to run this through the new business system we had chosen – SAP – or whether we created something distinct for Payback,” says IT manager Gary White. “As the Payback process is so specialist, we decided we needed to handle this separately – with a bespoke web-based system.”

The system DCSL has built for us is at least 200 percent better than what we had before. The previous system we had was so terrible and clunky that this is light years ahead.

DACS already had DCSL Software’s details from the Software Advisory Service, from an earlier query when it had been weighing up the merits of a bespoke financial system. Seeing the rave reviews on DCSL’s web site and its obvious experience with bespoke portal solutions, DACS invited the company to submit a proposal. When the tender process got down to three potential providers it became clear that DCSL’s was the only development team capable of meeting the tight deadline. It was now September, and DACS needed a live system up and running for claimants by the beginning of January when the next CLA campaign would begin.

DCSL, a Microsoft Gold Partner, developed the new Payback application using the latest web development technologies, including ASP.NET WebAPI, C#, SQL Server, .NET Core, Entity Framework Core, HTML5 and Vue.js, all hosted in Microsoft Azure. As part of its Agile development approach, and to accelerate development, DCSL also exploited the use of its in-house technology, ‘Waterloo’ – a suite of tools for developers to speed up the creation of functionality common to many software systems. 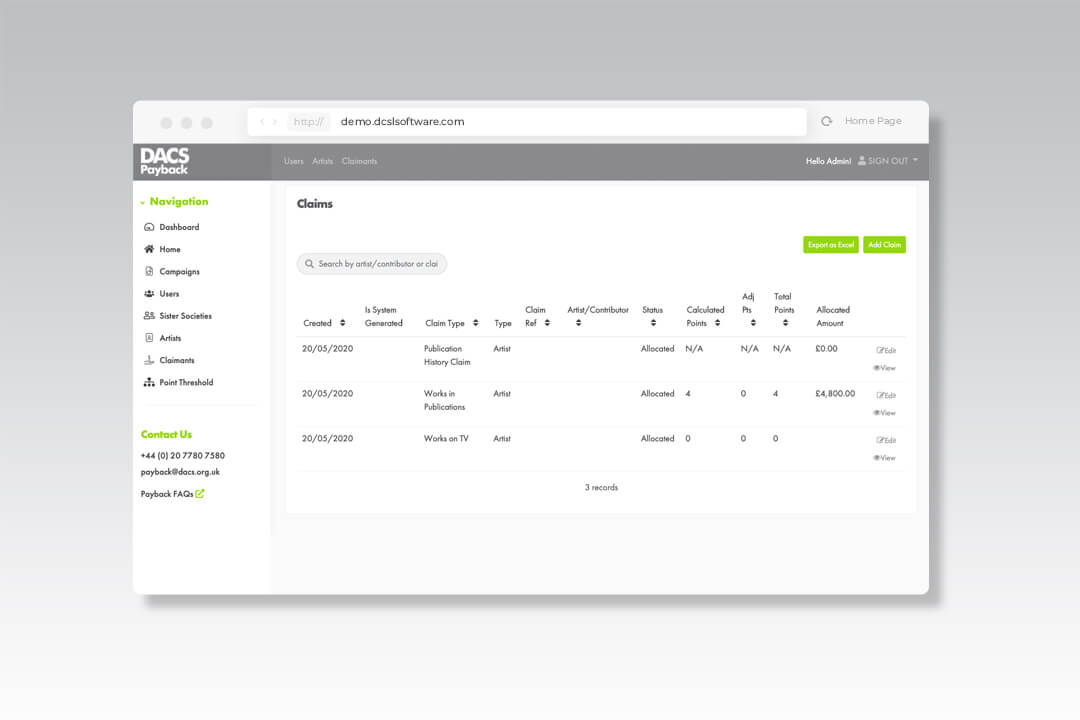 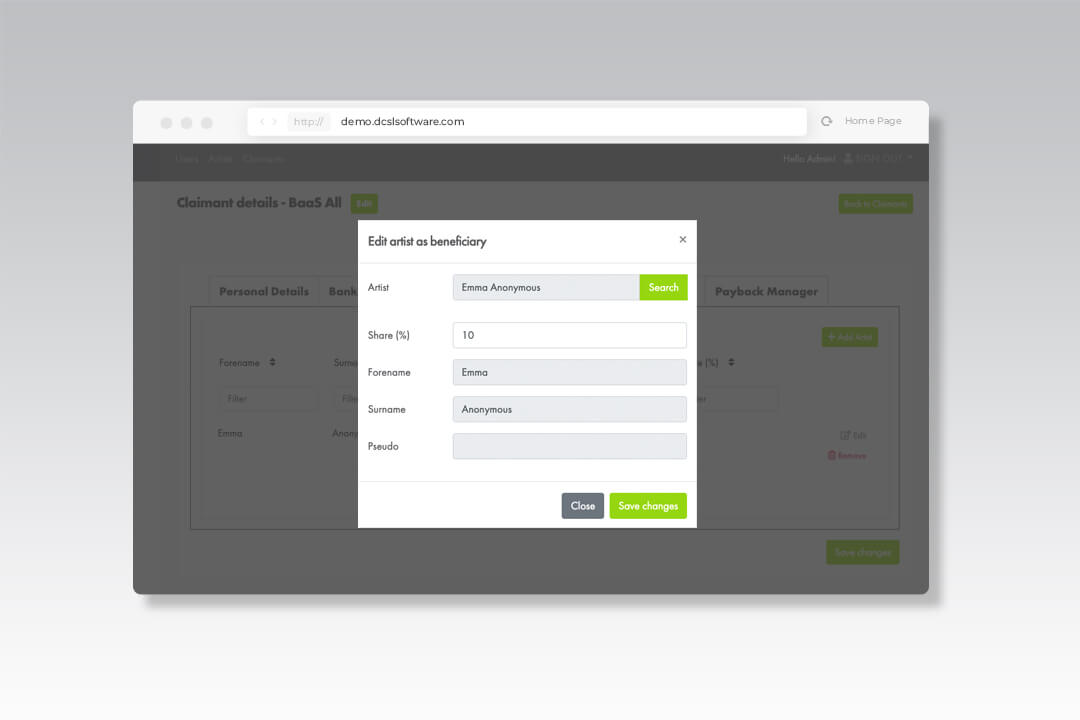 The new Payback portal system has two parts – a claimant portal through which artists, beneficiaries or their representatives enter details of all relevant work. Publication title lookups (using ISSN/ISBN) are performed using APIs from different providers, speeding up the search for instances of art reproduction.

An admin portal, meanwhile, makes it easy for DACS to download claims in the required format before submitting them to the various licensing schemes. Successful claims are then imported into the admin portal. In September, when the royalties are received, these are allocated to claimants, and the payment amounts downloaded. On payment, all claimants receive a statement for the year.

DCSL’s collaborative, sprint-based software build approach meant that, even with a tight development window, there was scope to add in new ideas along the way. “We added a video of how the new portal works, a progress bar, and a few other nice finishing touches,” Gary says.

True to its promise, DCSL delivered the claimant portal so that artists could start inputting their details in early January. The volume of claims made in 2020 was several thousand greater than in previous years, Gary notes, attributing this to the new system’s ease of use. 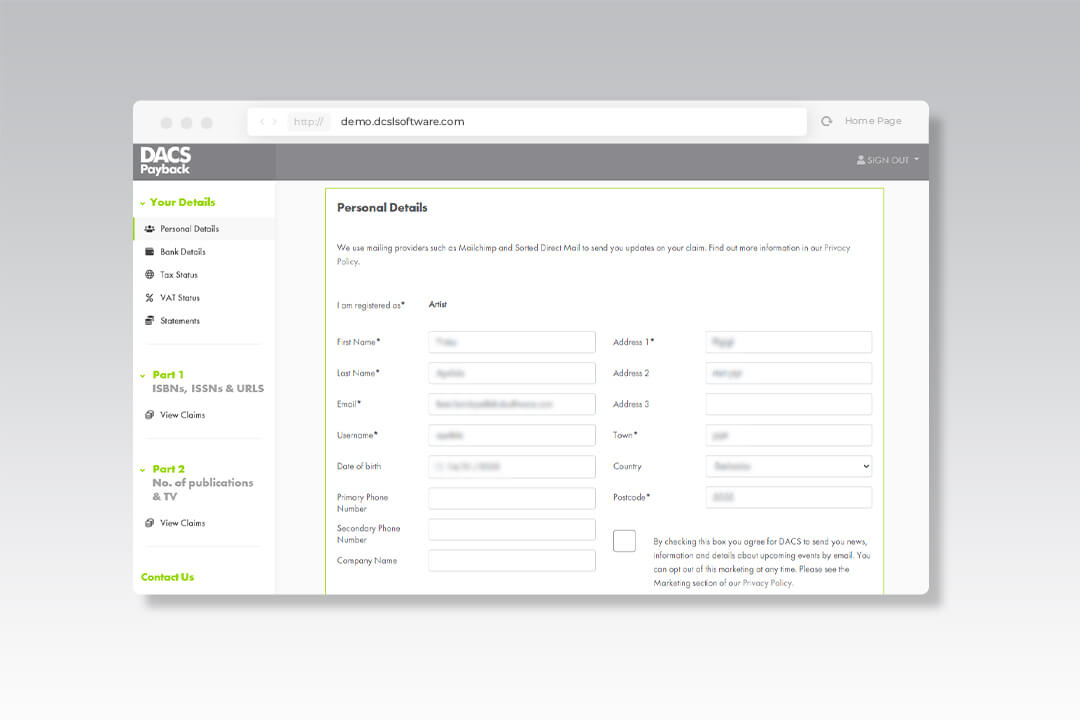 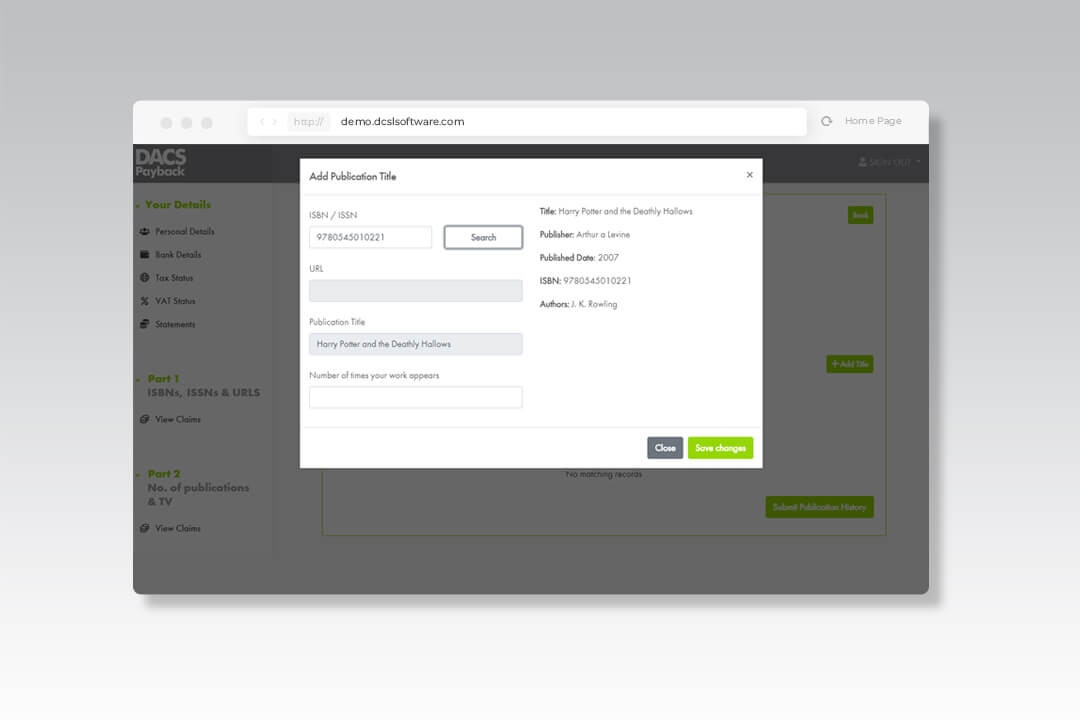 “The system DCSL has built for us is at least 200 percent better than what we had before. The previous system we had was so terrible and clunky that this is light years ahead,” he says.

“Everything is better. It’s impressively fast and efficient – its slickness is outstanding. It’s a lot simpler to navigate. It looks great on a mobile, too, so claimants can interact with it however they want to. The new Payback system has been mentioned in a number of articles in art magazines, too: there seems to be a real buzz around ‘DACS’ shiny new web portal’. We’re seeing this on social media too: lots of comments about how much easier it is to make a claim.”

For DACS internally, the big system update means that the reconciliations needed to allocate and distribute money from CLA can be achieved in seconds rather than 2-3 weeks using spreadsheets and the old Microsoft Dynamics database. And creating a payment is now a simple case of selecting a menu item, reducing the burden on the distribution manager. “We’re a very light-touch organisation, so this means we can handle even more claims without a strain on our small team,” Gary says.

“But the biggest impact of all is that the portal’s speed and ease of use is encouraging more artists to claim money that’s rightfully theirs. That was our goal above all, and we couldn’t be more pleased.”

Everything is better. It’s impressively fast and efficient – its slickness is outstanding. It’s a lot simpler to navigate. It looks great on a mobile, too, so claimants can interact with it however they want to.

Looking for a bespoke software solution for your business?