Berkshire Hathaway Reinsurance Group underwrites excess-of-loss and quota-share reinsurance for property and casualty insurers and reinsurers. The company is part of the global Berkshire Hathaway insurance group headquartered in the US, with a City of London base and representatives around the world.

When Chief Actuary Karl Dooner joined Berkshire Hathaway Reinsurance Group’s City of London operations in 2013, he saw an opportunity to use modern technology to improve the actuarial, financial and regulatory reporting processes within the business.

The system he developed, which has been in use for the last four years, pulls data from a central database to perform calculations for the business. It has proved sufficiently valuable that the Reinsurance Group’s US team in Stamford, Connecticut, requested that the system be extended internationally, moving users in other regions away from their reliance on older processes.

However, the system’s front-end, which teams use to manually enter policy and claims information, needed updating: it had originally been built in the 1990s using Visual Basic 6.0. To bring everything up to date and be able to roll out the same actuarial and financial reporting capabilities internationally, the company needed a new, modern web-based front end for the system, with strong database integration.

“The idea was that teams across the world – from Singapore to Germany, Ireland and the US – would all be able to log in and access and interact with the system from their respective desktops,” Mr Dooner explains.

The idea was to keep the software simple and very intuitive to use, rather than add in lots of features. What was critical was good front-end security via an authorised user login, and support for different ways of viewing and uploading data. Users would need be able to readily add and access unstructured content such as PDF documents and spreadsheets alongside structured data from company databases. Version control was also a priority, to make it easy to identify and retrieve older records as well as newer updates – something web-based databases don’t typically cater for. 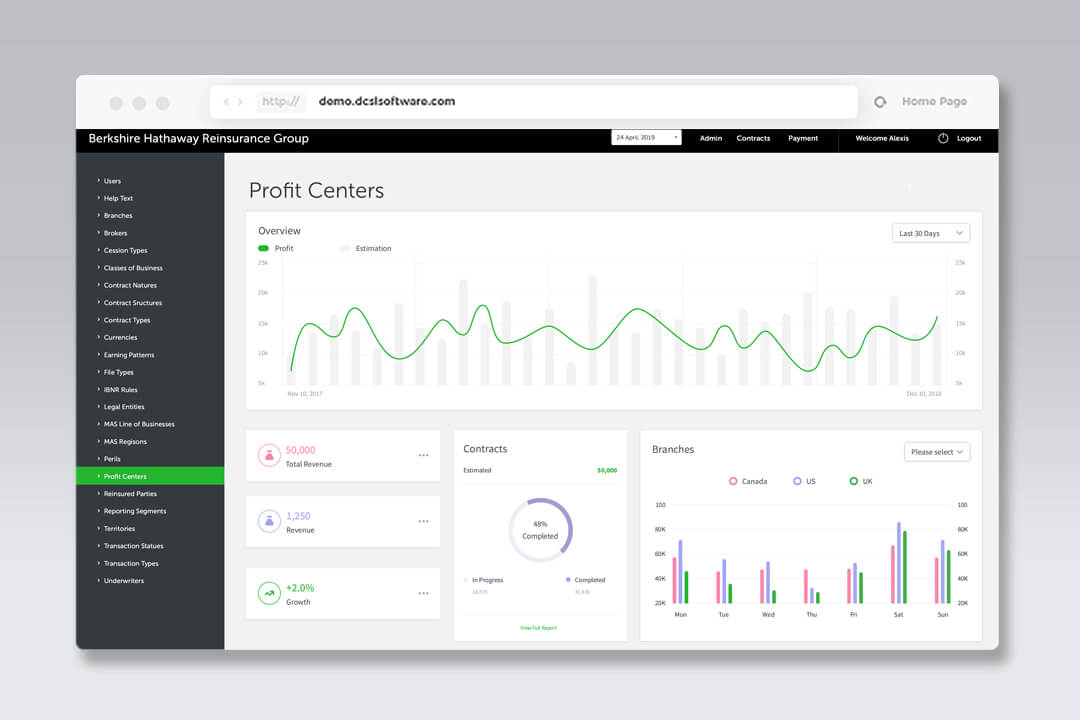 In the search for potential development partners in and around London, Mr Dooner discovered DCSL Software. Its considerable experience of developing sophisticated database-linked web sites and intranet portals with easy-to-navigate front-ends was reflected in numerous client testimonials, suggesting that DCSL would be an ideal partner. An initial meeting with DCSL’s owner and the project manager confirmed this.

Once Berkshire Hathaway Reinsurance Group had outlined its requirements, DCSL built a prototype of the new web system using the latest Microsoft technologies – ASP.NET Core, with SQL Server at the back end and unobtrusive JavaScript (uJS) at the front end. This ensures a fast and responsive user experience, by separating the web site’s functionality from the structure, content and presentation of its pages.

DCSL did a fantastic job, and were a pleasure to work with. They’re clearly extremely competent at what they do, and have produced a system that is very clean, modern and built using very well-structured code. That’s a real sign of expertise.

The deadline for the project was ambitious, but DCSL’s location meant that the flow from initial kick-off meetings to Webex and phone-based collaboration kept everything moving at speed. “DCSL Software’s agile approach worked very well for us,” Mr Dooner notes. “We opted for flexible rather than fixed pricing, as we suspected our requirements may change as the project evolved which turned out to be the case, so we were glad to have taken this route.” 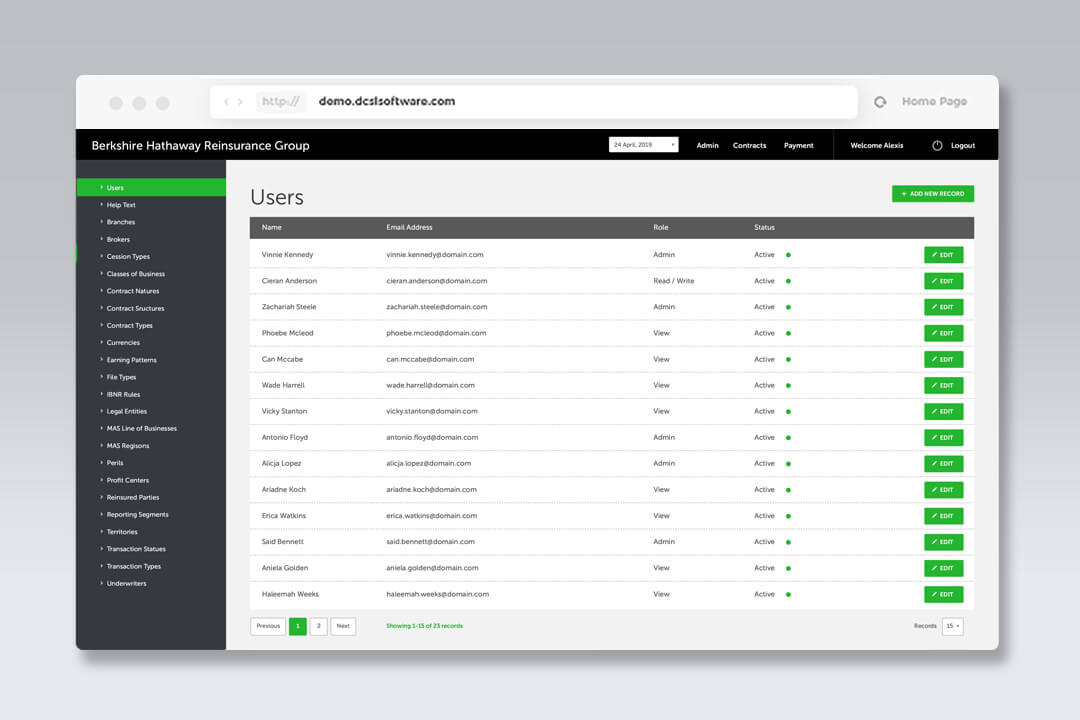 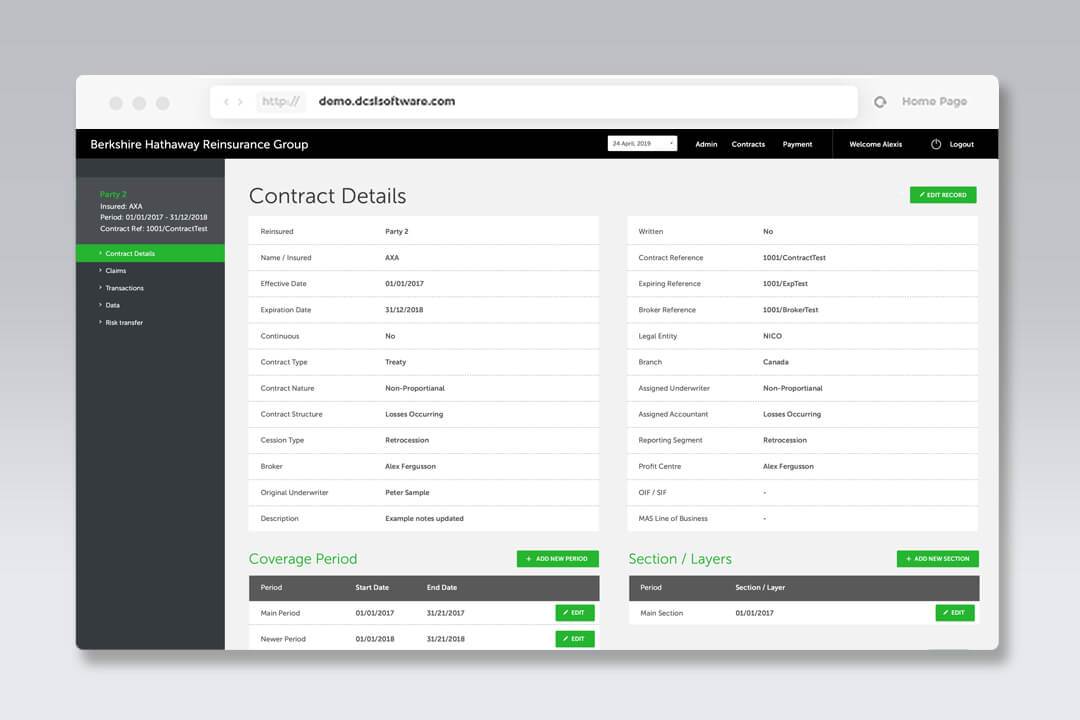 The new web front-end was very well received in testing with the UK and US teams. The web site consists of numerous screens to input data in a structured fashion with a clean and modern interface. Unstructured data such as PDFs of contracts, spreadsheets of analysis, and any other related information can be dragged and dropped to upload to the database for quick retrieval.

DCSL was also able to provide sophisticated controls for managing updates to any of the records. “One issue with data warehouses that sit behind web sites is that they are not very good at maintaining different versions of data over time,” Mr Dooner explains. “They tend to either overwrite old data with the latest entry, or list all the updates in a separate table – and neither of these approaches makes it intuitive or easy to recreate older records if needed.”

DCSL implemented a solution that ensures records written to the database are never changed; that updates/newer records are added separately, with date markers so it’s possible to search by time period. “When the data is extracted, users add a simple condition in their query and are able to quickly access records from any given point in their history,” Mr Dooner continues. “This is a unique feature for a database of this kind, making it much more powerful and useful.”

Although the new system won’t have a competitive benefit, as it is primarily for reporting purposes, the impact will be significant in reducing operational risk and costs, thanks to its transparency and increased automation. “It’s clean, scripted and reduces the scope for human error,” Mr Dooner notes. “Historically, all of our information was spread across different places – people’s emails, on the network, on local drives. We now have the ability to keep everything together. We also have clear indications that this system will be much quicker at producing financial statements, retrieving data, and auditing figures because all the data is captured in one place.

We’re very pleased with the system... I had very high expectations and DCSL delivered... There was nothing DCSL couldn’t incorporate into the web engine: whatever we needed, they could do.

“We’re very pleased with the system. It looks attractive and modern – more in keeping with the kinds of technology people use and enjoy in their own time – and it is very intuitive and responsive,” he adds. “The clean look and feel and ease of navigation are very impressive, which is down to the design. I had very high expectations and DCSL delivered. The project manager always came back to us very quickly after any change requests and was extremely accommodating. There was nothing DCSL couldn’t incorporate into the web engine: whatever we needed, they could do.”

The project ran so smoothly with such a positive outcome that Mr Dooner has given it a five-star review on Clutch, a respected software development feedback site.

“DCSL did a fantastic job, and were a pleasure to work with,” Mr Dooner concludes. “They’re clearly extremely competent at what they do, and have produced a system that is very clean, modern and built using very well-structured code. That’s a real sign of expertise.”